Milky Way: a Distance to the Galactic Center - 3

First attempts to estimate the distance to the galactic center

In the late 18th century William Herschel made an attempt to locate the position of Solar System in the Milky Way. His approach was that the center of the galaxy is the place with the highest concentration of stars and by locating such a region he can locate the center of our galaxy. So he looked at all directions and did not find any area of the sky that had a higher concentration of stars than any other area . Based on these observations Hershel concluded that the Earth (or rather the Solar System) must be in the center of our galaxy (HershelWeb). In the meantime, he discovered and catalogued over 2400 objects defined by him as nebulae and included in his famous 3 catalogues.
In 1906, Jacobus Kapteyn began a big project to find the size and the shape of Milky Way, which took him 16 years of intensive observations. He divided the visible sky into 206 zones, and with help of his colleagues from 40 observatories, he surveyed stars in these zones, analyzing their magnitudes, apparent brightness and proper motions. This project was the first coordinated statistical analysis in astronomy.
In 1922, the results of this study were finally published: our galaxy was 30,000 light years across, 6000 light years thick, and the Solar System located in its center. Kapteyn’s model of the Milky Way was commonly accepted as accurate for many years.
So the Earth as a member of Solar System was  again considered a special place – the center of our galaxy.
Note: while doing his study of proper motions, Kapteyn found that observed stars could be divided into two streams  one moving in almost opposite direction to another. These Kapteyn's data were the first evidence of the rotation of our Galaxy (KapteinWeb).
Harlow Shapley began his globular cluster survey in 1914, working on the largest telescope this time 60-inch giant at Mt. Wilson Observatory.
During his research, Shapley discovered the Cepheid variable stars in a large number of the globular clusters he observed. At that tome the period-luminosity relationship for Cepheids was just reported by Henrietta Swann Leavitt. Using her data Shapley determined the distances to 93 globular clusters (GCs) he observed. He found that the distribution of GCs was centered at about 15 kpc away from the Sun in the direction of the constellation Sagittarius by mapping out the three dimensional distribution of the clusters. This gave Shapley the idea that such massive objects as GCs should be centered at the galactic center. Shapley published his discovery in his "Big Galaxy" theory in 1918 (CudworthWeb). 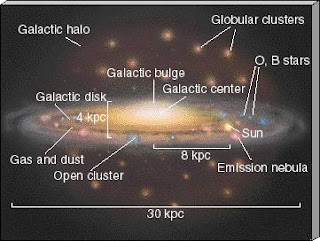 A distribution of globular clusters around the center of Milky Way.
However Shapley's conclusions remained controversial at the beginning, they were eventually accepted by majority of astronomers, and his technique is still considered one of the primary means of determining the distance to the center of the Galaxy.
Jan Oort, while conducted research of the motion of stars in the vicinity of the Sun, found that stars exhibited differential rotation – stars closer to the center of the galaxy traveled at higher velocities than stars farther away from the center. In his paper published in 1927, he identified the center of the galaxy in constellation Sagittarius within 2° of Shapley’s estimate. The distance to the Galactic Center according to Oort was 10 kpc, which is much less than Shapley’s estimate (Oort 1970).
Similar studies in the 1970s and 1980s with much better data and absorption corrections yielded half shorter distances about 8 kpc.
Kapteyn, Shapley and Oort produce such divergent estimates of the distance to the galaxy center because at that time they did not have an important piece of information – the knowledge of interstellar extinction.
References:
HershelWeb - http://en.wikipedia.org/wiki/William_Herschel#Deep_Sky_Surveys
KapteinWeb- http://en.wikipedia.org/wiki/Jacobus_Kapteyn
CudworthWeb-http://nedwww.ipac.caltech.edu/level5/ESSAYS/Cudworth/cudworth.html
Oort, JH (1970), "Galaxies and the Universe: Properties of the universe are revealed by the rotation of galaxies and their distribution in space", Science 170 (3965): 1363–1370, 1970 Dec 25, Bibcode 1970Sci...170.1363O, doi:10.1126/science.170.3965.1363, PMID 17817459
Caldwell, J., & Coulson, I. (1987). Milky Way rotation and the distance to the galactic center from Cepheid variables The Astronomical Journal, 93 DOI: 10.1086/114393
Posted by Olga V. Vovk