Saggitarius A*: distance and mass estimates 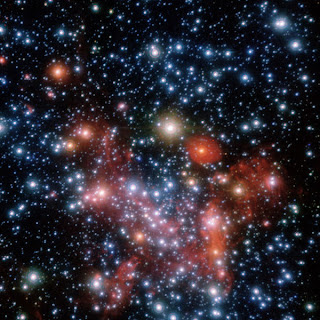 Center of Milky Way. Credit: Stefan Gillessen, Reinhard Genzel, Frank Eisenhauer
Knowing distance to Sgr A* (Ro) is very important, because it sets the distance scale for every other distance within Milky Way. The total Galaxy's mass, the Sun's orbital velocity, and luminosities of distant stars rely upon the accurate measurement of Ro.
A variety of methods have been employed by astronomers to determine Ro. These can be separated into three broad categories:
1.    The Shapley method of using “standard candles” measurements of objects thought to be in spherical distribution around the core;
2.    Computational methods that combine observations with Galactic models to arrive at a distance;
3.    Direct measurements to objects at the Galactic center.
I will focus on recent advances in direct measurement techniques.


The recent advances in infrared astronomy,
such as adaptive optics and imaging spectroscopy, allowed high-resolution imaging of the galactic center with 0.025" angular resolution, which corresponds to a spatial resolution less than 200 AU. With such instrumentation, the orbits of stars in vicinity of Sgr A* can be precisely measured. It is safely to say that Sgr A* provides all of the gravitational attraction in the nearby region, and the motion stars in close proximity is governed solely by this object. Therefore, direct observation of this motion can provide the mass and distance estimates for Sgr A*.
Ghez et al. (1998) using specially processed near-infrared imagery from the 10 m W. M. Keck telescope identified the position of 90 stars in within 6”x6” region near SgrA*. By following the stars over 2 years, they were able to show that those close to SgrA* have radial velocities as high as 1400 +/- 100 km/s. The high orbital velocities and closeness of the orbits to the central mass allowed Ghez estimate it as 2.6 ± 0.2 x10^6 Msun.


With the mass of the central object estimated, and several years of baseline position and velocity data in hand, Samir and Gould (1999) proposed a direct geometrical method for determination of R0, based on Kepler laws. The similar method has been used for decades to estimate the masses of, and distances to, visual binaries.


Keplerian methods
The problem with using Keplerian methods is that we do not directly measure the size of the orbits of distant stars. Instead, we measure the proper motions, which is a measurement of angle rather than length. We also need to know the orbital inclinations.
Using only the proper motions and orbital periods of the stars near Sgr A*, we could only derive the ratio mass Sgr A*/R0^3.
We have, however, one more piece of information: a Doppler shift for each star, as it moves toward or away from us, permits to directly calculate both the mass of Sgr A* and the distance R0 from Earth to Sgr A*.
Recent results
The followed continuous monitoring of the star positions proofed that stars do follow elliptical orbits with the focus close to Sgr A*. Also stars acceleration vectors were found directed to a common central gravitational source very close to the position of Sgr A* (Ghez et al. 2005). The orbital periods of observed stars are ranging from 15 to 94 years. The star with the shortest period (~ 15 years), labeled S2, has already been observed  completing its orbit.
Note that the Sun's orbits around the galaxy center  with a speed 220 km/s and  its orbital period is about 240 million years.
Schodel et al (2002) used high-resolution near-infrared imaging and spectroscopy to observe the central few light years of our Milky Way and study of the stellar dynamics in the vicinity of the compact radio source SgrA*. From a statistical analysis of the stellar proper motions and Doppler motions they inferred the presence of a compact mass of  2.6- 3.3 10^6 Msun plus the visible stellar cluster of core radius 0.34 pc, located in a region confined within ten light days of SgrA*. 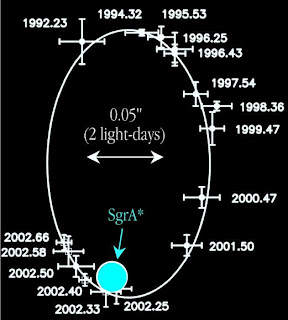 Motion of a star around the galactic center,

demonstrating that Sagittarius A* is a black hole
Eisenhauer, F. et al. (2005) used near IR imaging spectroscopy with astrometric accuracy of 75 mas to observe the central 30 light-days close to the galactic center. They determined radial velocities for 9 of 10 stars in the central 0.4”, and for 13 of 17 stars out to 0.7”, limiting stars magnitudes to K~16. By combining the new radial velocities with SHARP/NACO astrometry and using a global-fit technique, they derived improved three-dimensional stellar orbits for 6 S stars in the central 0.5” region. This result in the updated estimate for the distance to the Galactic center from the S2 orbit fit as Ro= 7,62 +-0,32 kpc, with a central mass of (3,61+- 0,32)x 10^6 Msun.
The instrumentation they used is SINFONI - a near-infrared (1.1 - 2.45 µm) integral field spectrograph connected to an adaptive optics module, installed on ESO VLT. The instrument operates with 4 gratings (J, H, K, H+K) providing a spectral resolution around 2000, 3000, 4000 in J, H, K, respectively, and 1500 in H+K. For more information about SINFONI, please refer to the following page: http://www.eso.org/sci/facilities/paranal/instruments/sinfoni/overview.html
After more than 16 yeas of observations, it was confirmed that stars in vicinity of Sgr A* are executing elliptical orbits, which fit well with a single mass enclosed in a very small volume at the focal position. Two stars have been observed to approach within 100 AU of the focal position, moving at nearly 10^4 km/s responding to an unseen compact mass of 4x10^6 Msun (Reid 2008, Ghez 2000, Shodel 2003).
How accurate these estimates are?


The error in the proper motion component of the stellar velocities depends primarily on the angular resolution of the detector. Due to advances in technology these errors have come down from 6-10 mas in 1998 to 1-3 mas in 2003 (Eisenhauer et al 2003).
The telescopic resolution also limits the accuracy of the stellar positions when they are very close to the central black hole or when two stars are close together in the crowded field because the two sources can blend together (Reid 2008).
Salim and Gould (1999) published a careful statistical analysis of how the error in R0 should decrease with increasing observational time - after 8 years of observation, the accuracy should be within 2.5% of the actual value, and after 10 years should be within 1%. They also suggested that the accuracy would improve with advances in technology and with larger telescopes, eventually yielding 0.2% error.

Any alternatives to SMBH?


According to Shodel et al. (2002), the only possible non-black hole explanation of huge mass of Sgr A* can be a ball of bosons of similar mass, because its radius can be only a few times greater than the Schwarzschild radius of a black hole.
Another prove for SMBH was analysis of the motion of Sgr A* relative to distance quasars. Sgr A* appears to be almost motionless moving 0.006379” per year (Reid & Brunthaler 2004). This is only possible if Sgr A* contains a huge unseen mass.
There is still a possibility that it might be a cluster of dark stars, e.g. a globular cluster. Because a typical GC to could contain 10^6 stars within a radius of 1 parsec. But there is a time constrain - dense star clusters undergo significant interactions, including core-collapse, collisions and evaporation of stars. For the cluster of stars with masses less of 1Msun (note that they should be low luminous starts, even dark ones), to achieve the current conditions close to Sgr A*, the evaporation time should be < 10^6 years, which seems too short. However, a quasi-steady state condition is possible, where stars feed the cluster from the outside at a rate comparable to the evaporation rate (Reid 2008).
References: